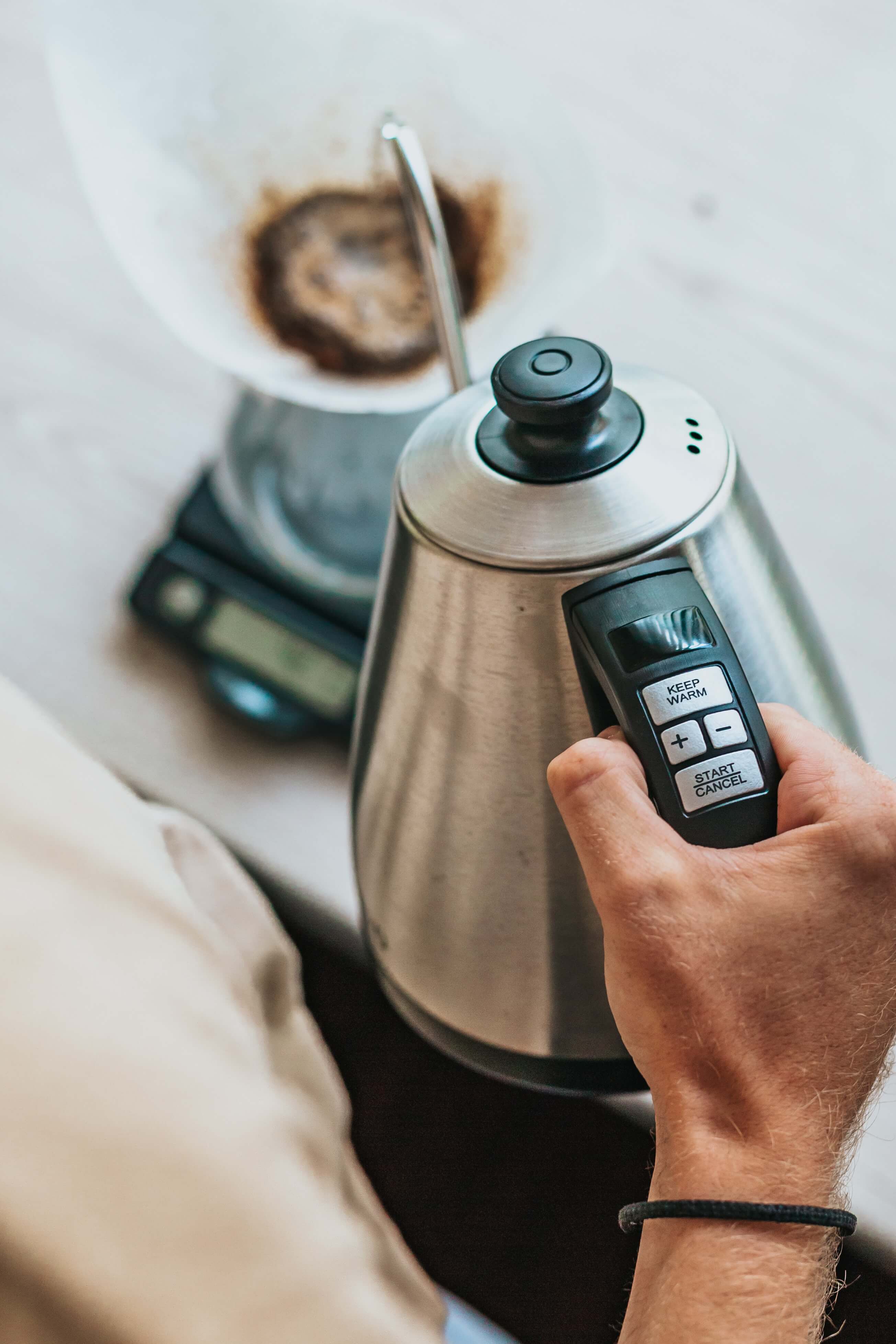 We use hot water daily. There are many reasons you may want to boil water. Maybe you are making tea or coffee, running a bath or even defrosting your windshield during the winter. Boiling water also destroys viruses, bacteria, and other toxins. This makes it safe for consumption.

Humans have been using hot water for thousands of years. Before the electric kettle was invented, we heated water by boiling it in pots. However, that was time-consuming and unsafe. The invention of the electric kettle in the 19th century has made the process of heating water safer and more convenient. Now, all you have to do is fill the kettle up with water, plug it in, press a button and wait for a few minutes to get hot water.

Electric kettles are essential for every home. They are just as important as any other household appliance such as cookers, irons, and even fridges. In this article, we’ll be looking at some of the best stainless steel electric kettles on Amazon to help you make the right choice on which one to buy.

Joyoushousehold.com is a participant in the Amazon Services LLC Associates Program, an affiliate advertising program designed to provide a means for sites to earn advertising fees by advertising and linking to Amazon.com

Amazon and the Amazon logo are trademarks of Amazon.com, Inc. or its affiliates.

Whether you want to make a quick cup of tea, oatmeal or soup, this Hamilton Beach stainless steel electric kettle is an excellent choice. It doesn't have as many features as some high-end electric kettles on the market. However, it makes up for that with its durable design. This is a kettle that was built to last. The huge 1-liter capacity ensures that you will have enough water to go around if you have an average-sized family.  You can get this stainless steel kettle for only $17.99 on Amazon. It comes with a 1-year limited warranty. 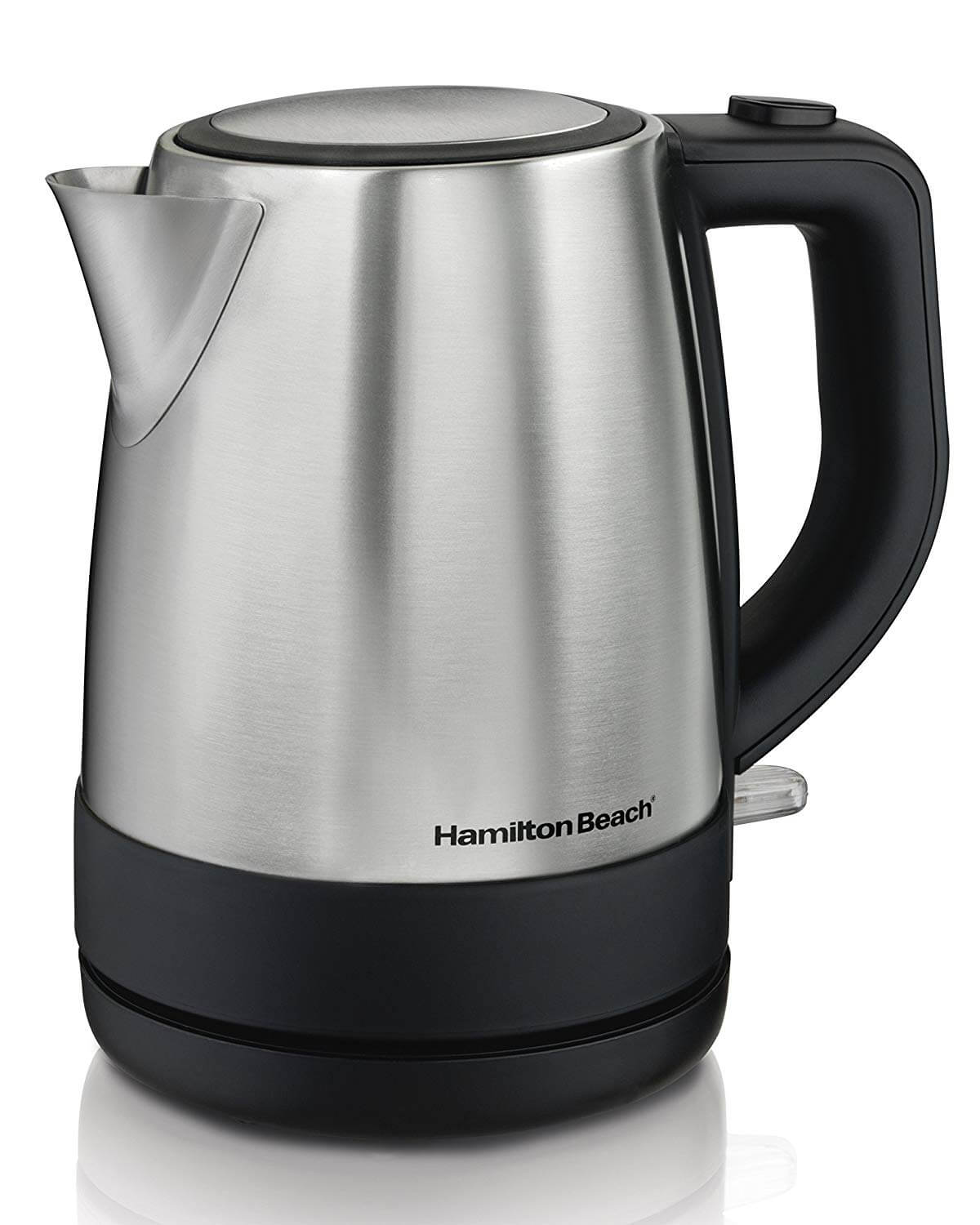 This product from Secura is regarded as the best stainless steel electric kettle by many people, and there is a good reason why. It has a capacity of 1.7 liters, which is more than enough to make several cups of coffee or heat water for other purposes like bathing and de-icing your car's windshield. 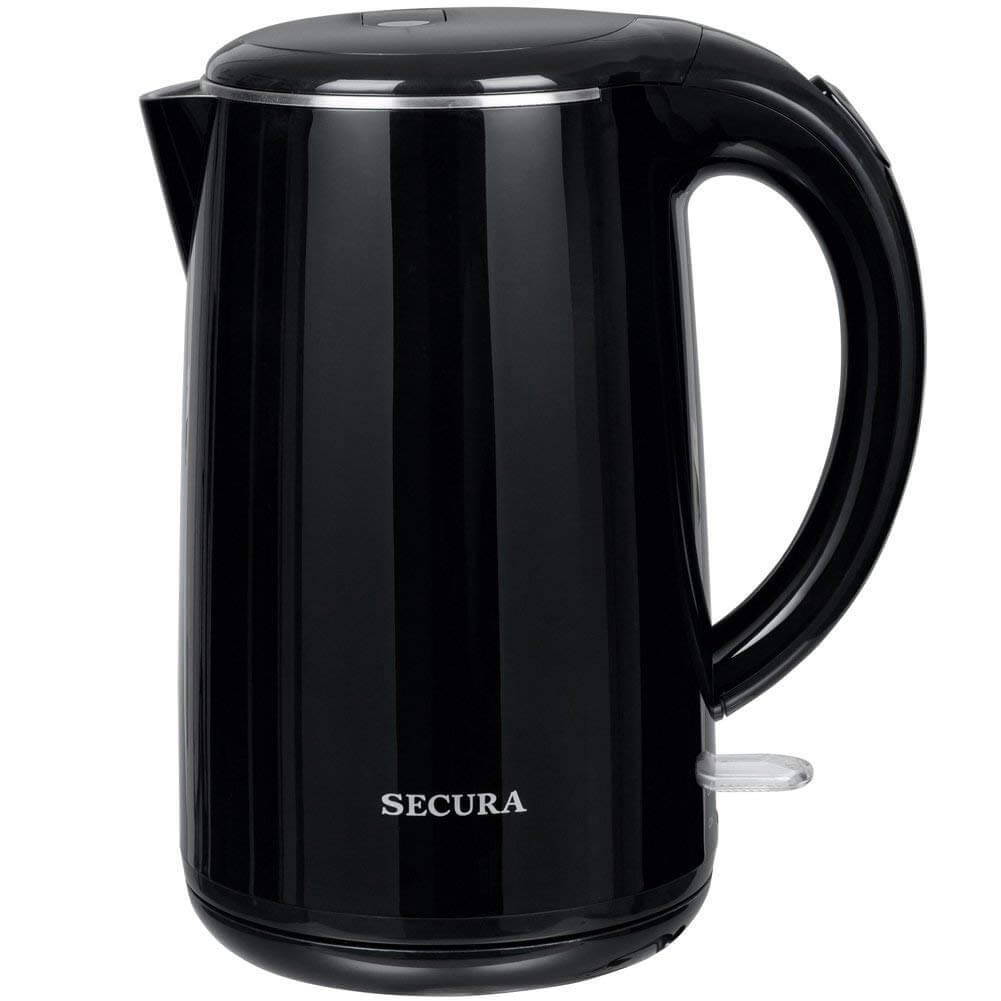 This kettle from Amazon is very affordable at just $20.99. It has a capacity of 1 liter but takes only 3 to 5 minutes to boil. This is a perfect kettle to buy if you have up to 6 people in your family and you all drink tea or coffee in the morning.

This Amazon kettle has a cordless design. It comes with a base which has a 30-inch power cable. This stainless steel kettle has a power capacity of 1500 watts (120V or 60Hz), which is one of the reasons why it boils water quickly. It has a switch that you can toggle on or off. The kettle has an automatic shutoff feature and boil dry protection. This means when the water boils, the kettle automatically turns off. 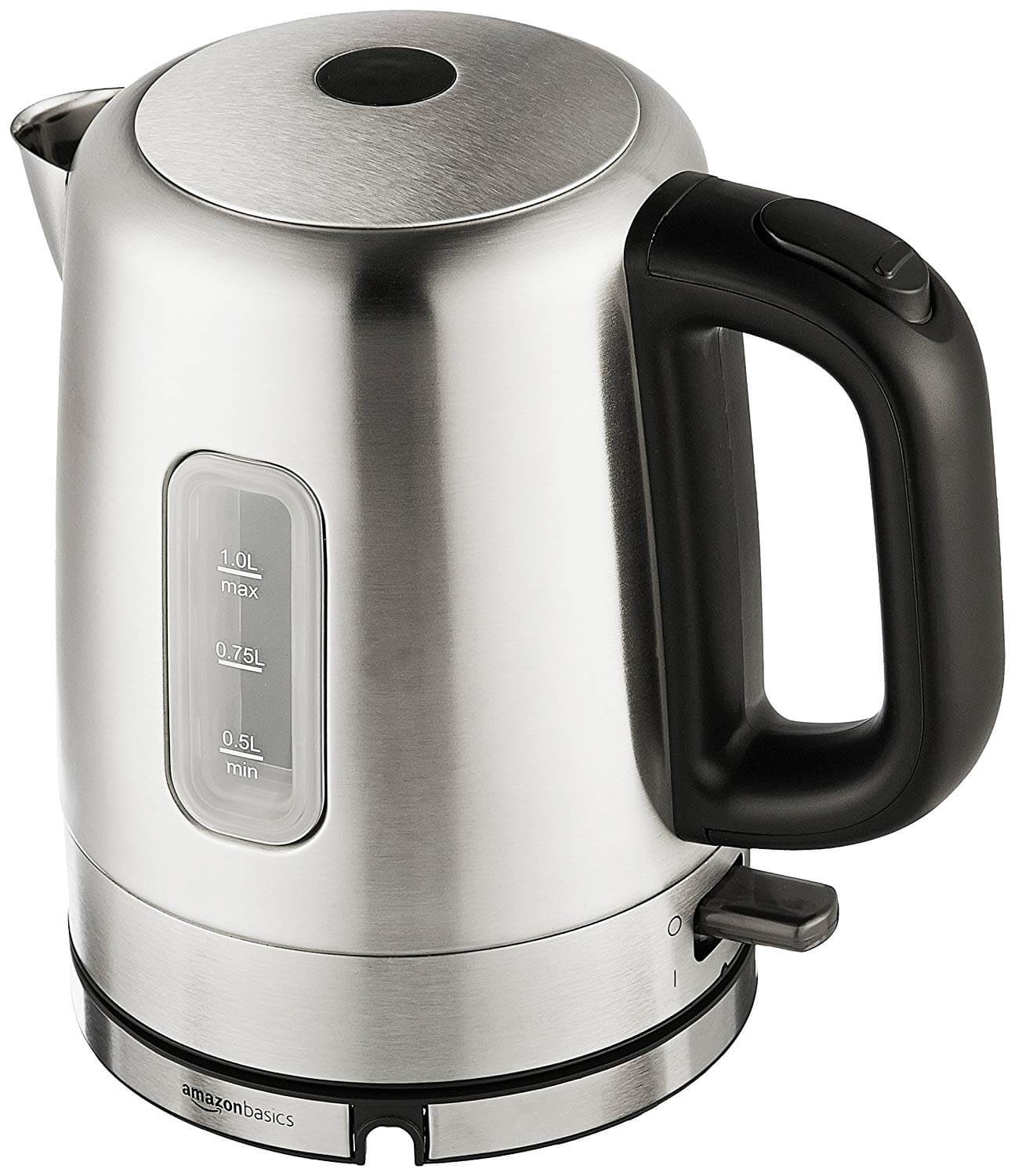 The kettle has a capacity of 1.7 liters. It has a memory feature which allows you to lift it off the base for up to 2 minutes without losing the temperature setting. That's not all; it can keep water warm for up to 30 minutes!

If you are looking for a stainless steel electric kettle that gives you complete control, this is a good option. Did I mention that it has a sleep mode as well as boil dry protection and auto shutoff? What more can you ask for? You can get this kettle for only $74.94 on Amazon. 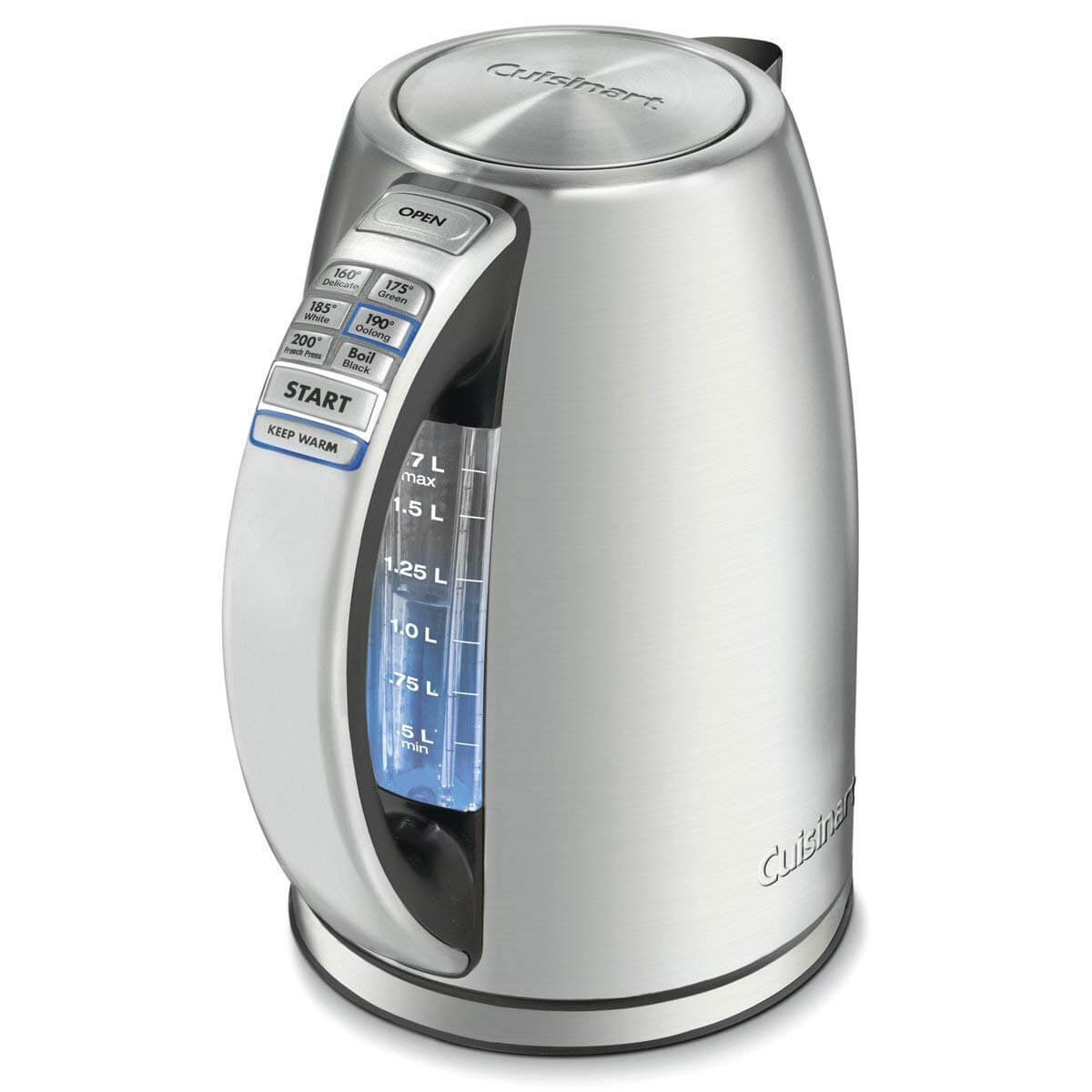 This is a cordless kettle. It can spin 360 degrees on the power base for your convenience. To open the kettle, you need to press on the middle of the lid. Although this Epica electric kettle has the same features as the one from Cuisinart we looked at earlier, it is more affordable. You can get it for only $41.95 on Amazon. It comes with a 2-year warranty. 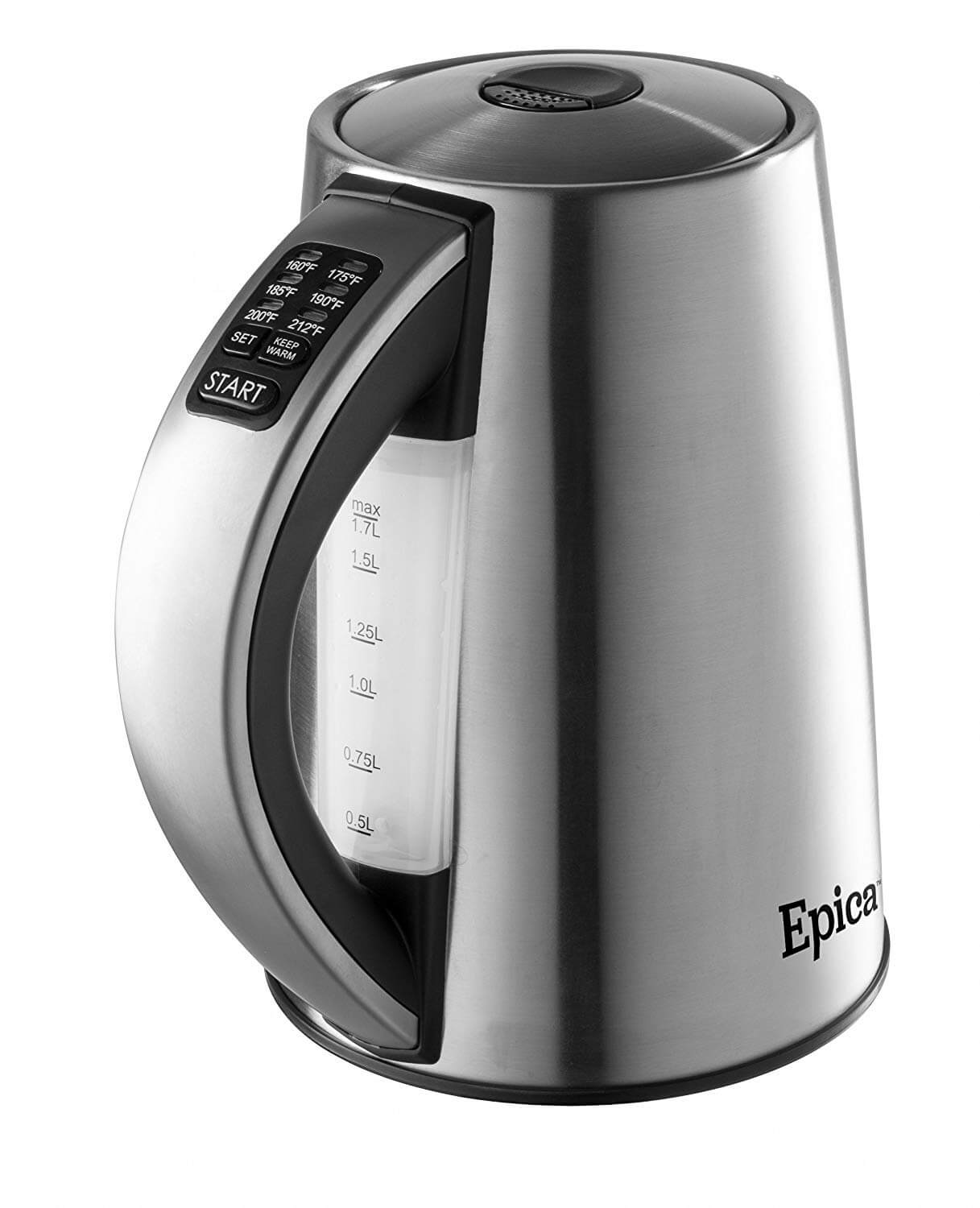 This is a stainless steel BPA-free kettle. It has a capacity of 1.8 Quart (1.7 litres). It is easy to use and hassle-free to clean. The kettle has a cordless design and can spin 360 degrees on the power base. You can get this CORSORI kettle for only $29.99 on Amazon, and it comes with a 2-year warranty. 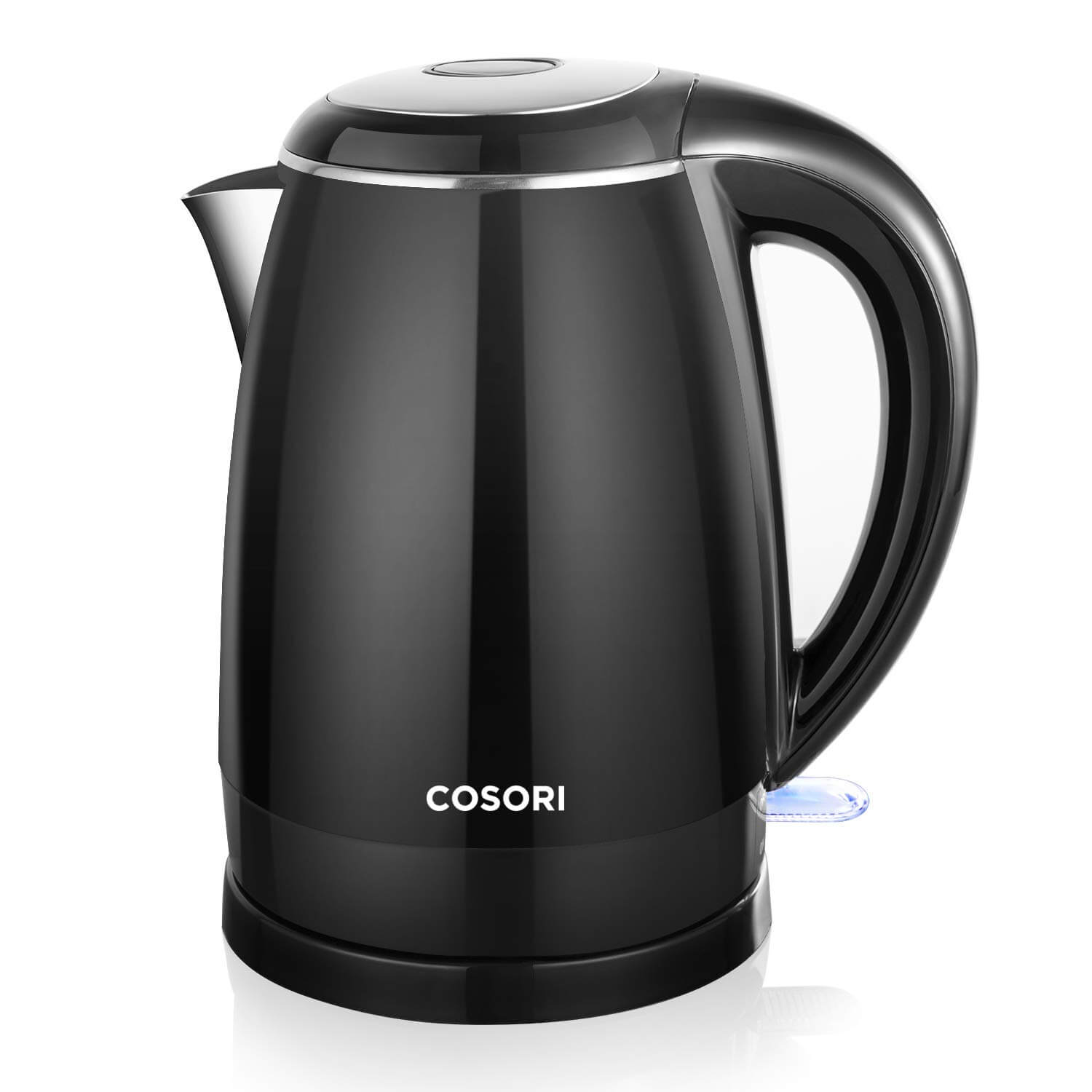 If you want a stainless steel electric kettle with the traditional kettle shape, this KitchenAid kettle is perfect for you. This is a high-quality, elegant kettle and it is easy to use. It doesn't come with lots of fancy features that may confuse you. Instead, it comes with basic functionality and gets the job done effectively.

You can get this kettle for only $59.99 on Amazon. It is available in different colors including red, black, pistachio, stainless steel, and blue. You can pick any color that suits you. KitchenAid offers a 1-year replacement warranty for this product. 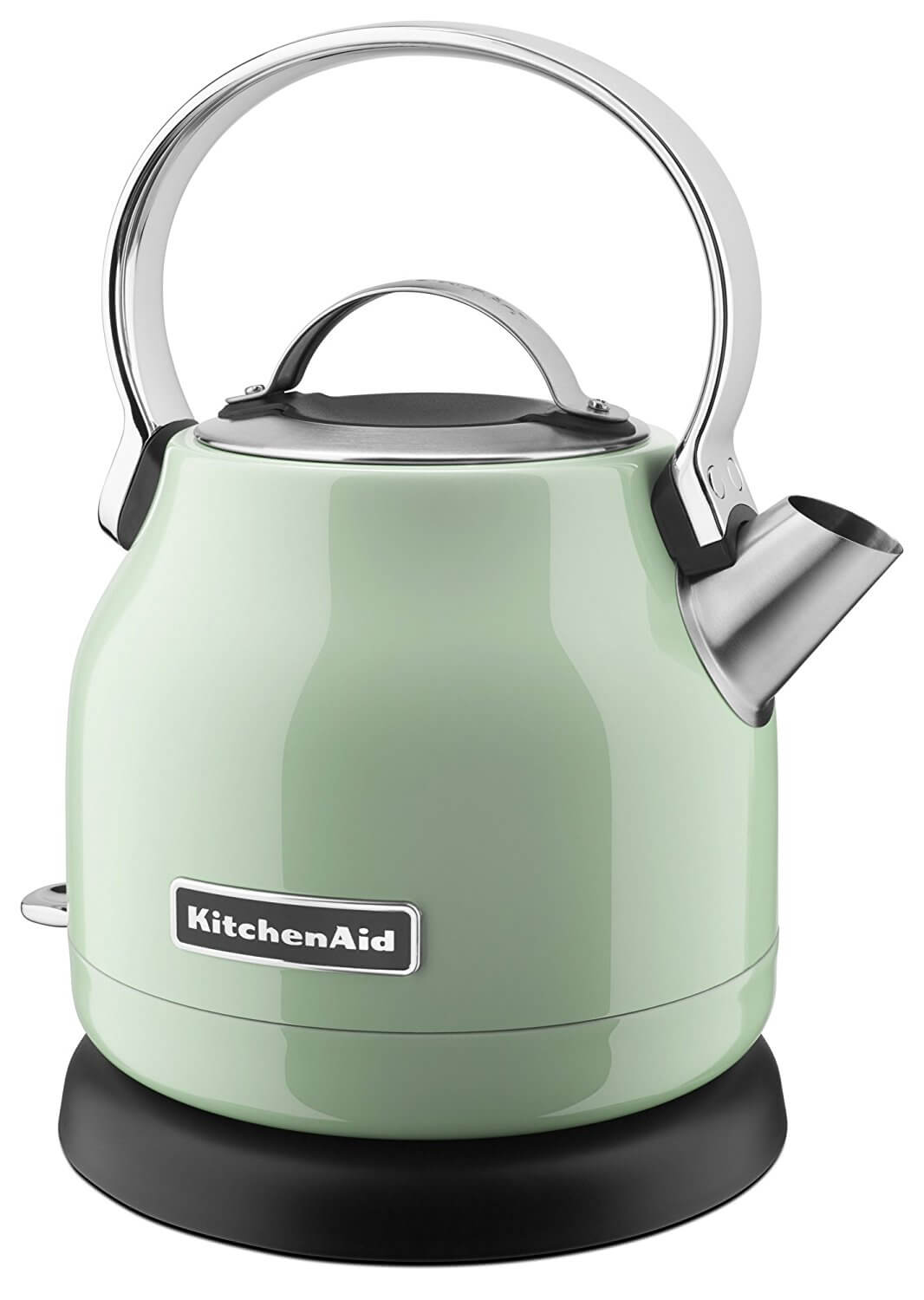 This kettle from Willow & Everett was designed for making tea or coffee with the pour-over method. It can hold up to 1 litre of water and boils surprisingly quickly. It is made of food-grade stainless steel and is BPA-free. The gooseneck spout of the kettle is extra long and is ideal for pouring hot water slowly over tea leaves or ground coffee beans.

You can get this Willow & Everett stainless steel electric kettle on Amazon for only $36.99. It comes with a lifetime warranty. This kettle is recommended for you if you live alone or with a spouse and you consume a lot of hot beverages. 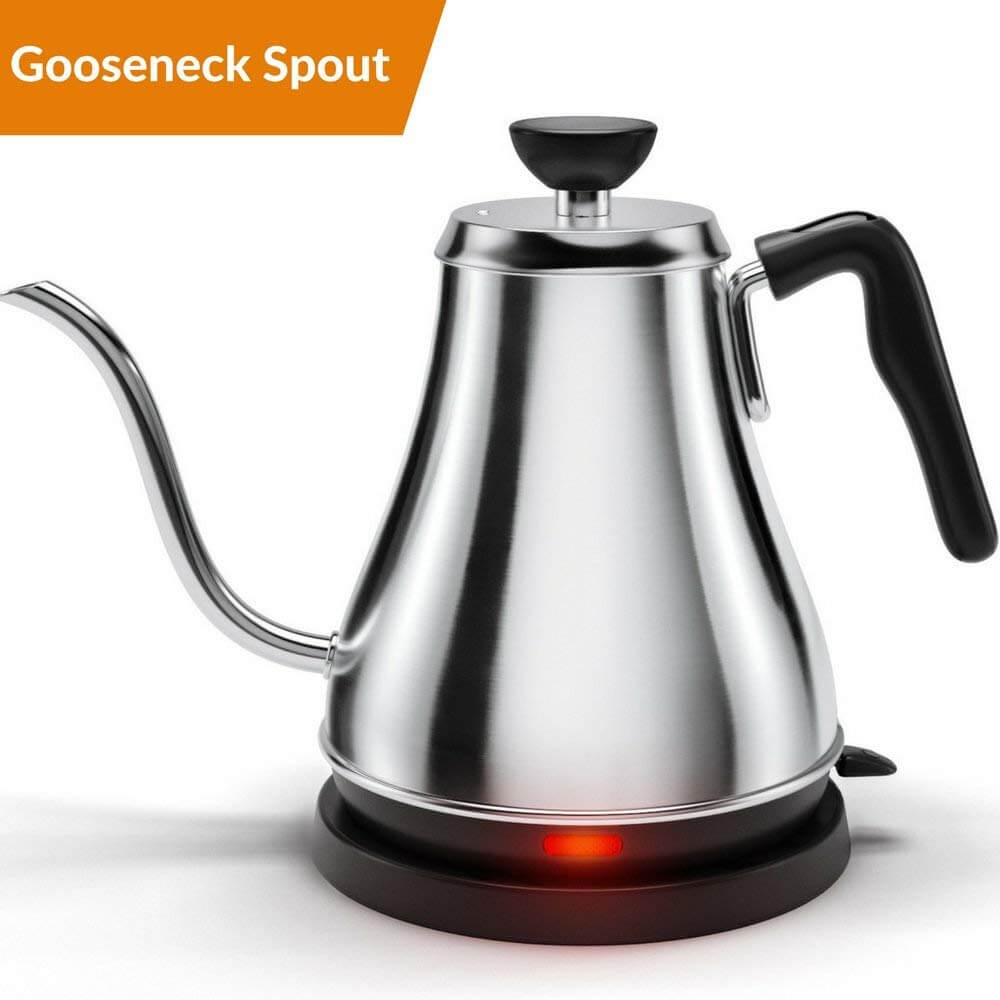 Hamilton Beach is behind some of the best electric kettles made in the US. Therefore, it makes sense that we look at another device from this company.

You will find water windows with measurement markings on both sides of the kettle. This allows you to check the water level in the kettle easily. Like other Hamilton Beach electric kettles, this one comes with auto shutoff and dry boil protection. You can get this kettle for only $29.99 on Amazon. 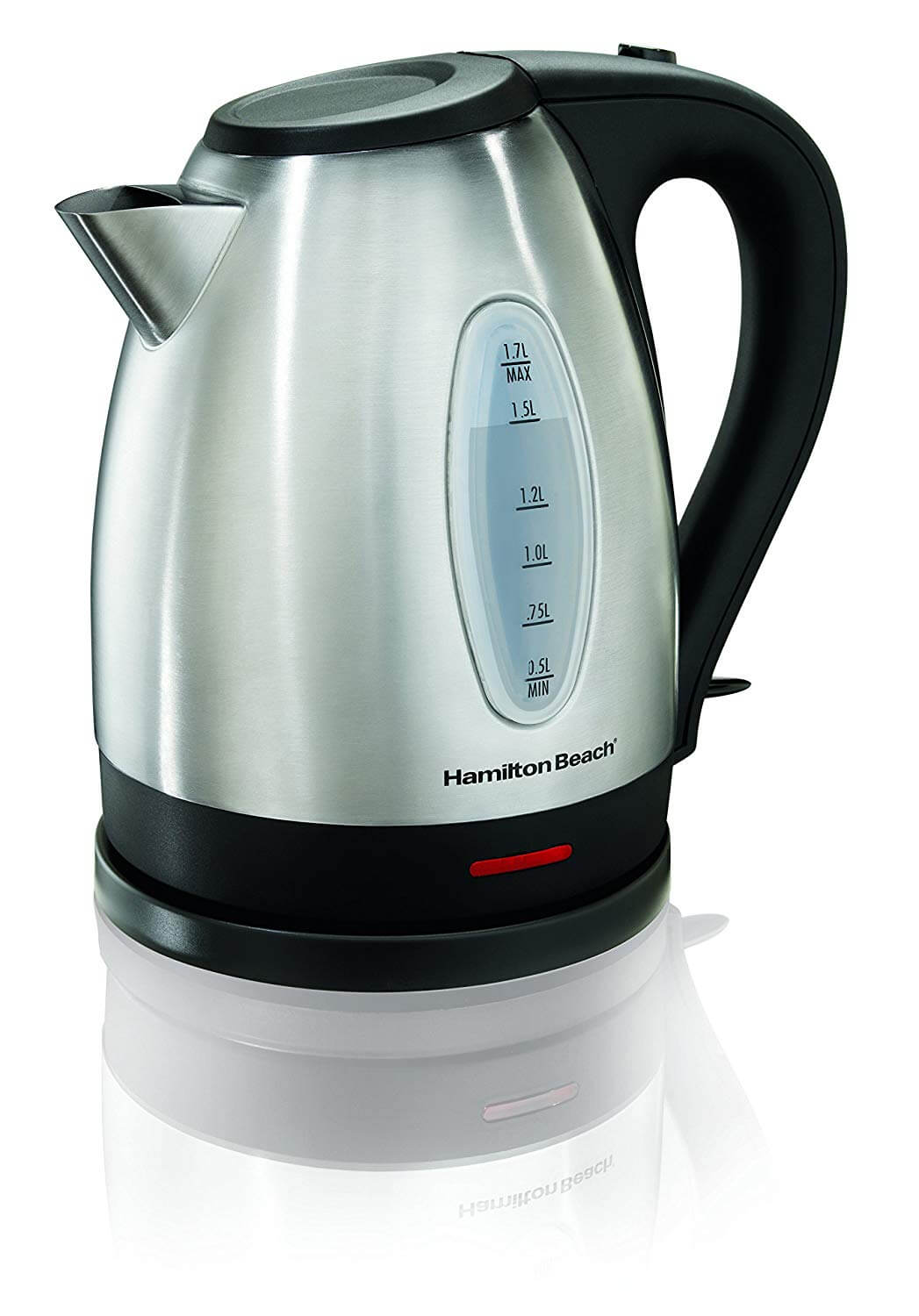 A Brief History of Electric Kettles

The invention of electric kettles occurred in the 19th century. However, cookware in the shape of kettles has been around for thousands of years. The earliest kettles date back to about 3500 to 2000 BC. Kettles were used in different parts of the world. In the 18th century, steel kettles grew in popularity in England. However, the only way to use them was to put them on a stove or over an open fire.

Chicago’s Carpenter Electric Company is credited with creating the first electric kettle in 1891. The heating compartment was located under the kettle. The company later integrated a heat radiator into its kettle design after Britain’s Crompton and Co. pioneered the idea. Different types of electric kettles surfaced in the early years. However, they all had similar problems. They were very expensive, and it took some time for the water to boil.

The Swan Company invented the first kettle with built-in heating in 1922. This design was refined over the years and has become a standard for electric kettles. While the development of kettles with integrated heating elements marked a leap in the industry, these kettles had some safety issues. For example, they were prone to causing electric shocks and continued to heat up once even if they did not contain water.

Household appliance manufacturer Russell Hobbs created the first automatic electric kettle in 1955. The kettle was vapor-controlled, which means it automatically shut off after the water boiled. The company continued to improve its kettle design and released different versions in subsequent years.

The earliest electric kettles were made out of copper, brass, and iron. Manufacturers have experimented with other materials and shapes through the years before settling on plastic and stainless steel kettles. Most modern kettles have a jug shape and a cordless design. However, there are still some with the traditional kettle shape and non-cordless design.

All electric kettles contain a coil at the base – it is the most important heating element. The coil is concealed in some kettles so you may not see it. When you plug in your kettle and switch it on, electricity travels into the coil. The electrical energy is converted to heat energy, which spreads in the water. As a result, the water starts to heat.

There is a simple reason why electric kettles heat water very fast and boil your water within a few minutes. As indicated above, heat is generated by the heating elements. However, electric kettles are designed to trap heat, and the vapor pressure buildup contributes to making the water boil quickly.

What To Look For

A great electric kettle should reach the ideal temperature quickly and accurately, making it easy to use. Based on that, we’ve come up with a number of things to look for when picking the top electric kettles:

Simple controls: Bringing water to a boil should be simple and quick. We looked for kettles with intuitive controls that were simple to start at the push of a button. It’s very helpful when guides to the ideal temperature for various beverages are printed on the machine instead of hidden in the manual.

Accurate: Reasonable accuracy is important for kettles with multiple temperature settings because there’s no point in aiming for 200 °F and hitting 212 °F instead. We looked for kettles that hit temperatures accurately on a consistent basis.

Fast: You don’t want to wait forever for your water to heat. Ideally we looked for models that came to a boil in less than 5 minutes when full.

Pours cleanly: Basic kettles should be able to pour into a mug without splashing or dribbling. With gooseneck kettles, which are primarily meant for making pour-over coffee, we looked for models that give you total control over the speed and direction of the stream.

Safety features: Kettles should have handles and lids that stay cool to the touch and keep your hands well away from any scalding surfaces. An automatic shut-off is another important safety feature—most kettles these days come with one, but it’s important that the feature works properly.

Easy to clean: All kettles will need to be descaled from time to time, as lime deposits build up inside. To make that process easier, we looked for kettles with wide openings that are easy to reach into for cleaning.

Nice extras: Waiting is especially a pain when a kettle doesn’t have audible cues to let you know that it’s reached temperature. That said, it’s preferable when a kettle is otherwise quiet—neither rattling while heating, shrieking during boiling, or setting off prolonged beeps as warning that you’ve let it sit too long.